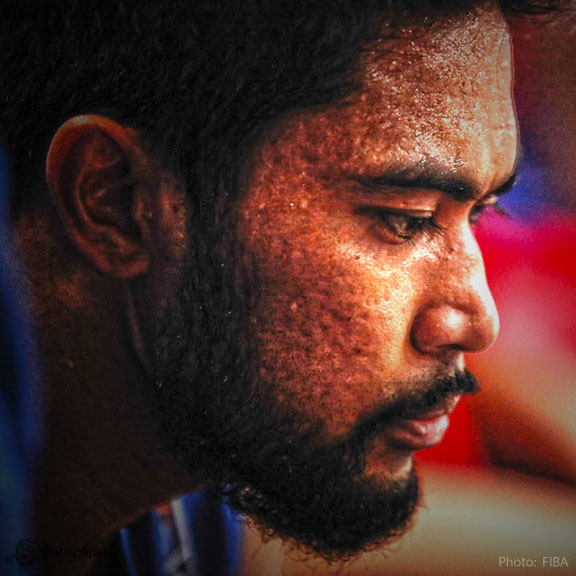 But we're a better team now. The last two wins, after having learned the lesson the hard way with Palestine, have somehow helped us and reminded us of what we can do. True the last games are against weaker opponents. But sometimes if not most of the time our real opponents are ourselves. Like the way we allowed ourselves to be defeated by Palestine. Now the last two wins rehearsed us of what we are. And that we can be tough.

Which brings me back to what the title of this post: Punch Sabay Hug (if you know what I mean). Ohyeah, the "National Elbow" himself and that untoward event as the time waned down during the Kuwait game. Every PBA fan knows who Ranidel is. Yeah, when he plays he can be Ranidirk, according to the gospel of Mico Halili. And he can be what his infamous title says about him: Pambansang Siko! And boy did he not hit the jackpot! Apparently Alhumaidi didn't do his homework. He didn't see that coming. Even the referees didn't see it themselves as well, they just saw blood and were close to blaming the Kuwaiti player that he must've bitten his lip and flopped. The refs were all left in the dark. And no one among them saw how that happened. They didn't realize until some playback of the incident that RDO's elbow was in fact wearing an invisibility cloak. So it was pretty much a perfect execution (after the game we learned that De Ocampo's family jewel was an aggrieved party). Yeah, poor Kuwaiti guy. He must have have realized that he really should learn how to receive, and not just give most of the time. He was way too generous, "giving" our players so that it was just the right time to give back. And his gesture was amply reciprocated.

Sunday's gonna be war once again. Looking forward na naman tayo mga ka-fans sa laro ngayon. Now every game matters. And our team needs to be more than 100%. Gilas Pilipinas needs to bring the "punch" back in. And we fans need to send them all our "hugs" by way of unwavering support no matter what.