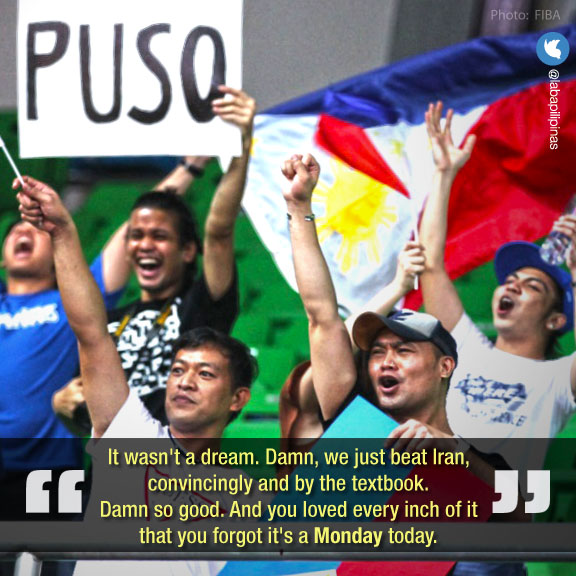 Not everyone loves Mondays. Students. Employees. Who else? It is usually a day after the weekend. And it means back to work, to school, stores or businesses, or what-have-yous.


But today's Monday is special for Gilas fans. Last night we were worried because of that game against Japan. It was a 50-50 game. And everyone at the back of their heads must be thinking: You don't beat Iran next day by winning against Japan this way. Iran beat Japan last time out by, what 38 points?

Iran is on top of our Monday agenda. For us Gilas fans, we were worried more about this game. For a time we forgot about our bosses and co-workers. Today we didn't think much about school and classmates, well, except talking about the game with them.

And worrying actually on how to sneak and watch the game even on smartphones courtesy of the school library's wifi. It was hard. I heard some who did watch at the library and by their office cubicles. It was an agony. You couldn't shout your heart out.  You held back punching in the air to celebrate the back to back three by Terrence. How you wished you could clap your heart out to rejoice about this unbelievable victory. While others watched the game on twitter. Man, that was even harder and so suspenseful.

I thought I was just dreaming.

I actually dreaded this day. It was the same schedule as the Palestine game. And the same predictable routine I was gonna have which means I will need to bring my son to school at 11:40. Right after the national anthems were played, I was packing my son's school stuffs and getting ready to drive him off to school.

But I changed patterns compared to what I did from last week's horrifying loss to Palestine. One thing very significant was I turned off twitter. I focused on the usual things that went by. Talking to my son until we reached school. Cracking corny jokes with him like the usual pastime we do while in the car.

On my way back home, I started something I didn't do last Palestine game. I attracted the win. I said thank you a lot of times. I kept thanking and thanking like in prayer until I found myself back in front of the TV set. It was the start of the 2nd half and we were trailing by two possessions. I still said my thank yous in my head. And left twitter untouched. I focused on the game as our players focused more and more intensely as well. Until we grabbed the lead. I watched on BTV channel this time unlike last time on TV5. I thought I was behaving like how players do with all those "pahiyangs" during game day. Well, fans do that too, take note idols. And it somehow works. Unbelievable!

It wasn't a dream. Damn, we just beat Iran, convincingly and by the textbook. Damn so good. And you loved every inch of it that you forgot it's a Monday today.

Mondays are gonna be great from now on!


On to the next crucial games. Let's remain focused. And eyes on the prize.

We're just here behind you, supporting, praying and doing crazy stuffs just to elevate the energy and winning vibrance.