Gilas and PHL Politics: Coach Tab Should Be Next President 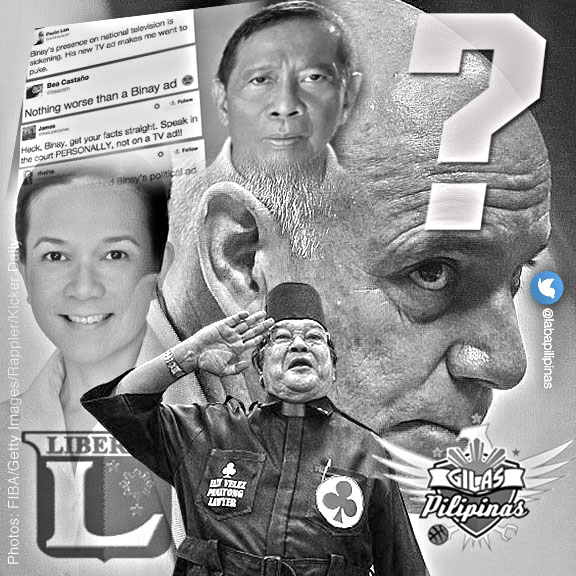 The circus just hit town! How time flies. Six years ago was just like yesterday when we saw Ely Pamatong doing his stunts as he filed his Certificate of Candidacy. Don't look now, he just did the predictable, you guessed it right, doing some flag-torching stunts once again and filing his COC for the 7,645,985th time! But wait, there's more: One who claims to be an alien. A weirdo named Archangel Lucifer. Fifty more names and counting! (Now breathe again). Face palm.


If we get Coach Tab in the mix, this will surely be worthy of the headlines.


Setting aside club biases and prejudices, let's look at Coach Tab's leadership as a reflection of this extinct political principle: The Party System. How's that true with the Gilas experience? This isn't exactly about Tab's person. But the way he ran the 3.0 program. I wish the same happens for our country. Gilas would've wanted to have the necessary star personalities. Someone who is popular among the masses. More like a Binay eating with his bare hands in a boodle fight. Or an Erap taking his time with the mahihirap. That's an instant acceptance for the crowd. Super fast identification with the people these personas are trying to project. Gilas 3.0 would've been a very easy to pitch to the majority of fans had it had James Yap. A Caguioa. Oh yes, JuneMar. Hell yeah, Jerwin Gaco, for heaven's sake!


But the 3.0 experience tells us Filipinos about this value. It doesn't have to be personality-based like what Philippine politics IS this past years. We didn't have the JuneMars, the Marcios, the Lees to satisfy public cravings instantly. Instead Tab had his hands barely full with an old dog in Asi, an aging shooter named Hontiveros, Sonny Thoss barey half his A-game a decade ago, and JC Intal would've passed for an Ely Pamatong the way fans ridiculed him on twitter. The silverware was a product of resilience and creativity by these hardworking athletes. This year's Gilas was deprived of manpower and time. But it didn't stop Team Philippines from cementing its status as one of Asia's best. And Tab's creative leadership greatly had a hand on this.


But we know it didn't end to where we wanted it to be. We missed the gold but gained so much respect we deserved. Even if we know that this leadership did not bank on surveys and public perception. Baldwin relied steadily on the principles and not on the star qualities his stable had to offer.


The Gilas 3.0 experience should school our populace (and consequently voters) on how leadership and responsibility must be handled, and the manner it is chosen. At the same time it has to inspire us, Filipinos to do more and beyond our limitations. Gilas barely prepared for two months and yet they showed us all how it's done. Performing beyond self, and focusing more on the system that's greater than its parts. Everyone had a role to play. Gilas 3.0 showed us what it means to carry the cudgels for an entire nation. What it means to make a stand and fight for basketball sovereignty of sorts. Asi Taulava was raring to be fielded if only for a few seconds in the gold medal game. But he knew and embraced the system. If the situation calls him to become the Pambansang Cheerer at the moment, he'd do that, sa isip, sa salita at sa gawa. I hope these political entities do the same, and genuinely put the country ahead of self. Put the self-interest at the back seat and the nation's welfare at the forefront.

Finding the Right One


Now what does it take to be the next chief executive of the land? Easy as pie: Must be atleast 40 years old, registered voter. Can read and write. And must be a natural born Filipino (and has resided in the country for atleast 10 years). It's actually harder to apply for the Gilas coaching job than it is to apply for the highest office in the land.

Alright, so Coach Tab's out of the equation. But maybe by looking at him and his work so far, it'll help us find the right leaders we Filipinos truly deserve.