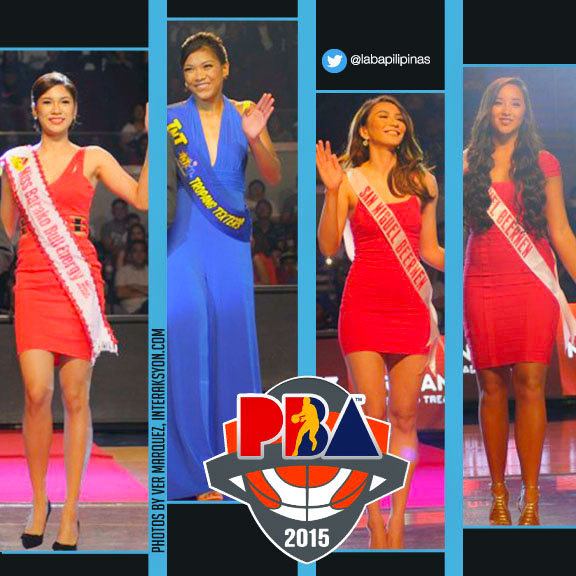 Finally the PBA's 41st season has officially opened before an expected sparse crowd. Not that the #BoycottPBA and #BoycottSMC (okay fine, #TeamSnowBadua) have gained a very significant following and have caused the dent on the gate receipts. Or probably that idea still lingers to some fans, just enough to keep them away even for the opening rites? Well, we all know about typhoon Lando being the culprit for the cancellation last weekend, making the PBA as it were to start 41st year on a wrong foot (and not JuneMar's foot, by the way). Until the move to a Wednesday inaugural looked bleak and seemed very un-PBA!

While watching on television, you can see a vacuum here and there. It's the PBA and coming from a 40th season inaugural last year, where it was by far the grandest sporting event in the history of Philippine sports having taken place at the 55-thousand seater Philippine Arena.

But the crowd was still there. It never looked completely empty, of course, it is still the country's premiere league. Purefoods Governor Pardo made sure more warm bodies were added to fill up the Mall of Asia Arena. His PR genius finally clicked and led the team to bringing in not one, not two but a dozen (or more?) muses! It was probably a way to get the team clearly noticed. As if to send a statement to SBP outgoing VP Ricky Vargas: "Hey there's a Purefoods Star Hotshots team in the PBA, okay?"

This season's battlecry is "Liga Ng Mga Bida". Which led some fans to reflect deeper and ask: "Who the hell then is the Contrabida?"

But there's no questioning our PBA players are indeed our basketball heroes. Most especially the gallant Gilas players, who were aptly honored at the inaugural as they were called one by one to the center court. It was a bittersweet experience for Gilas fans. For the past months our timelines were filled with these Gilas heroes and their ordeal. We breathed Gilas Pilipinas basketball and even questioned our own sanity because we thought about Gilas for like 24 by 7. But then we all know, it was worth it. The silver somehow felt like a little bit of gold. The Gilas experience is way beyond the Fiba Asia tournament now. It's become an experience of being a Filipino, saan ka man sa mundo!

Now back to the Gilas tribute. As of this writing though, Troy Rosario, Mo Tautuaa and Aldrech Ramos are still at the Mall of Asia Arena waiting for their names to be called at the centercourt.

But one very significant game-changer to the Wednesday PBA opening is actually a sport not called basketball. We all know that second to basketball it is volleyball that comes very close. And like a well-designed play that is so hard to execute, the last recourse is sometimes creating something out of a broken plan. And broken play it may seem, it somehow saves the day. Thanks to these volleybelles who graced the PBA opening by gamely acting as club muses. Who are these ladies who made some hakot crowd for a weekday—school and office day opening festivity? They are all superstars at their own rights. And it's amazing how these fine and gorgeous ladies command a very significant following be at the social media or live gathering. TalkN'Text had Alyssa Valdez. Barako Bull nailed a stunner in Mika Reyes. And PBA fans who are not so abreast with some showbiz sports thought that Kiefer Ravena has already been drafted by the Barako Bull! These two have like millions of fans already. So wherever they go and whatever they do, a lot of people follow them. And some of their fans were at the PBA opening, while some more millions keeping the PBA abuzz over at a universe called social media. And people were left to wonder, what if Yaya Dub the other half of the social phenomenon #AlDub made it to become muse to any of these PBA ballclub. You can just imagine how the PBA will trend having the hashtags #YayaDubPBA. Or perhaps #AlDubYaPBA. Or how about #PBAlDub? Wow. Some fans will surely be excited to likewise trend #AlPob for whatever reasons.

Oh yes, before we forget the other volleybelles, San Miguel Beer has a pair of excellent choices. While other clubs failed to bring in Maine Mendoza (aka Yaya Dub), the Beermen were lucky enough to have in tow together with the pretty Alexa Micek, no other that another noontime sensation, Pastillas Girl!

Oh wait. Erase that please. We have a caller to clarify these matters. Oh, there. It's actually the hot and oozing Rachel Anne Daquis! Corrections please. (Oh men. Who's writing the script here?)

So there you go. PBA is alive and kicking. Again, we can only hope for more improvement and significant changes, para sa fans, para sa bayan! They have started with the officiating, which is crucial for the PBA, that's a given fact. And call that a significant change, aside from the referee-substitution, their new Skyflakes-inspired uniforms surely didn't get unnoticed by the fans!

See you at the games! (Uhm, if you can't be there like me—a busy household COO—we can always cheer and trashtalk via twitter!)