Why Philippines Should Host the OQT? 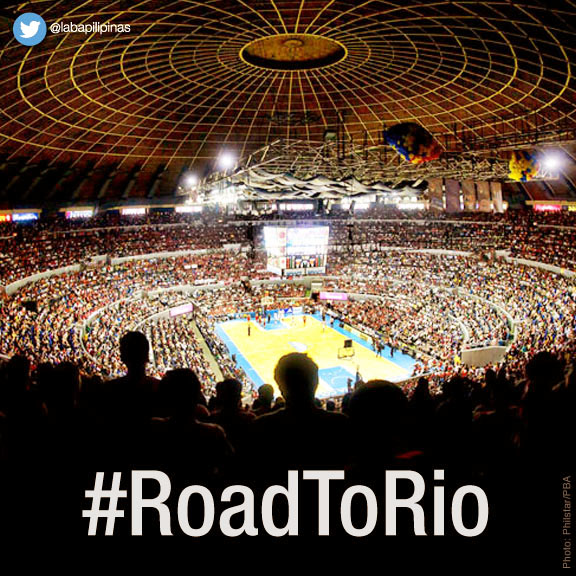 
And if that was fast enough, we Gilas fans welcome this with all positivity and excitement. (Although marami din nagtaasan ng kilay sa kakaiba at mabilis na pag-aksyon ng PBA. Well played nga naman, in time for the season 41 PBA opening.) Nevertheless, we don't want to go back to the kind of Gilaserye the 3.0 batch has gone through. Sana ngayon wala nang gusot. Sana eto na rin yung — cliche alert — tamang panahon!

We really need to bring home one of the three OQT hosting rights. Coach Tab has already expressed his views why we must make Manila one of the three OQT venues (although in this Spin article, he was assuming that Philippines was the only Asian country bidding for a wildcard hosting).

But with this imminent breakthrough basketball experience, it is by necessity that we must get this hosting. Just look at the basketball insatiability among millions of Filipinos (not just those in the Philippines but Filipinos spread across the world). Having one of these in our country is like anticipating another humongous Aldub event about to happen before a myriad of basketball fans.

Now imagine Lola Nidora as the Fiba Central board voice asking the question: "At bakeeet?" Of course the univesal response from every crazy Filipino basketaball fan is: "At bakit hindi?!?"

When this happens, it will be like a mini-world cup event. It's like being in a group back in Sevilla, Spain during the 2014 World Cup only on home soil, probably in Mall of Asia Arena or at The Philippine Arena. It's almost but not quite an Olympic experience. Perhaps the same number of games we'll be playing when we make it to the Olympics. And it's a great treat for the home crowd. Wow! We all can't go to Rio. So having the OQT here is somehow close to bringing the Gilas Rio experience already. Now if our #Puso2019 campaign almost convinced the Fiba board that we can actually host the next World Cup of Basketball, then it's moot and academic to argue why the Philippines can't do the OQT, right?

July 2016 will be summer or school break. Of course it's not summer here in the country by then. Wet season is expected to be in full swing by that month. But we have a new President by then. Who's that one candidate again who filed his COC for the 2016 Elections and is proposing to bring in the four seasons to supplant the wet and dry that we currently have? Now if we elect that crazier than crazy dude then that solves the problem (probably via a Presidential Decree declaring July as a summer season). Kung hindi nga naman mas tanga yung boboto diba? So erase that carabao crap proposal.

We hope the ASEAN integration will be in full swing by next year. If so, most of the schools would open by late July or early August. So regardless of  the climate conditions, we can expect a lot of basketball fans at the venue, especially the students from K to 12 and college! And since it is summer elsewhere but here, a lot of Filipinos living overseas can actually plan to have their summer breaks spent here — back home! Perfect, and get the chance to cheer for Gilas Pilipinas! Now that sure is an awesome homecoming and reunion for basketball crazy Filipinos. And filling up the 55,000-seater Philippine Arena is not a far fetched reality either! We can actually propose an official hashtag now and call it: #GilasRoadToRioSaTamangPanahon. And Fiba officials be like: What the hell was that?

It's a given: Basketball Never Stops here. So why not give the hosting to this country. When we thought the culmination of Fiba Asia 2015 has ended our basketball life, well wake up and realize — basketball season is just starting! Every basketball league shown on local television calls for attention. Be it college basketball or amateur and semi-commercial leagues like the PCBL and FBA (there's also ABL opening soon with a new Philippine team in its cast)—these games are worth the while for every Pinoy basketball junkie. Of course the PBA is back. And the NBA is just about to tip off. And when all these play on the same day, it's the beginning of a so called crisis. Which game are you going to watch? You just changed the channel to UAAP and missed a moment of a lifetime when Manny Paquiao finally made his historic first field goal by way of his patented BT shot. So are we not a basketball country or are we not a basketball country? Oh wait, who you kidding now. Come on FIBA, you can hand it over now to us.

Oh, you might wonder about the "BT" shot by the Pacman mentioned earlier. The PhD's of the Street Corners (read: #tambaysakanto) say that it's the technical and scientific name for a particular shot awkwardly illustrated as "Balibag Tae"—apologies to those having their meals while reading this.

It's self-explanatory. Having the wildcard here will just make the basketball landscape even better. Plus it cements our reputation as the world's hotbed for basketball.

Now, some keyboard analysts (and critics) say PBA now is a mere "sports entertainment". By such label it demotes the PBA to the same level as WWE (which elicited an immediate reaction from the professional wresting group: "Hello, excuse me?!"). That doesn't sound good enough. And of course that's highly preposterous. We don't want to believe that PBA is scripted, right? (Okay fine. It's a fact, JuneMar was injured. So that his PBA season 41 debut should make him like 70 to 80% ready. And coach needed to limit his minutes, right? "21-17-38" just sayin'.)

With the Gilas experience—and the hosting of the OQT—Pinoy hoops fans are exposed to an even higher level of competition. And we have proven that Filipino ballers can compete. So with this, if we get to witness before our very eyes a world-class basketball experience, our taste buds would get accustomed to it, and would crave for more. It will spark more interest to the already growing passion for basketball. Even college hoops will be greatly influenced. How about the PBA? Will the PBA just give us crap in return? Of course not. We expect the PBA to level-up as well. To become a world-class league. And if we get to win and qualify to Rio. Then, wow, really wow, what does it say of the PBA—where most of our Gilas players are from. Our league's a kickass, solid professional basketball league ready to rival the NBA. Uhg! Perhaps the PBA can now have their own pre-season global games as a prelude to season 42.

Now why should Philippines become one of the three hosts of the FIBA Olympic Qualifying Tournament?

(Insert a Miss Universe-like snappy and witty answer here, then shout at the top of your lungs...)