Are You A Nominal Ginebra Fan? 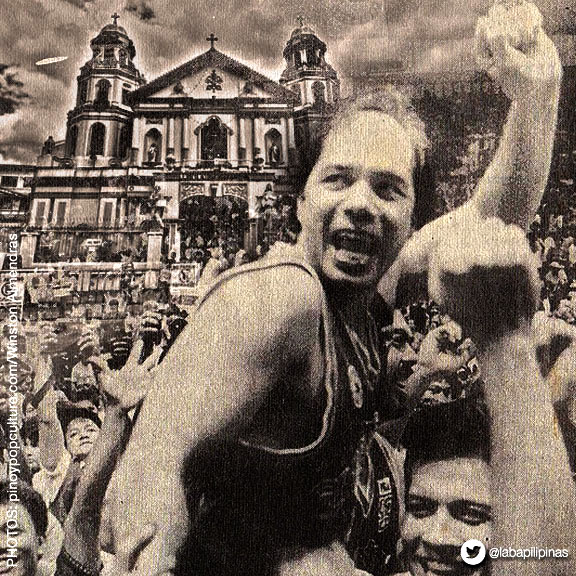 You must've heard about "nominal catholics". Yeah, usually they're born to catholic parents, been baptised and all that, grew up a catholic, went to Sunday mass as a kid tagging along lola or mama. But when that baby has since become a lady or a gentleman, he's not seen even the vast entrance of a cathedral. Sa madaling salita eh, eto yung tinatawag na KBL catholics. Not referring here to the infamous Marcos political party. KBL stands for Kasal-Binyag-Libing. Or simply put—katoliko lang sa tatlong pagkakataong nabanggit!


In-between these KBL occasions, this catholic doesn't care that he or she is actually one. However a person highly considers oneself as "catholic" once again—when filling out application forms, interviews or when the need arises to have a religious affiliation—because a tick box requires to be checked right next to it.

GINEBRA FAN
Now apply the concept of being a "nominal catholic" to that of a Ginebra fan. And that's just weird. Like the Catholic religion which claims more than half if not 75% of the entire Philippine population, the Ginebra team through the years has become synonymous to PBA with its legions of fans. How could you not identify yourself with the most popular basketball team on this side of earth? Parang ang hirap yatang isiping ayaw mo makilala na kabilang ka sa pinakasikat at may pinakamaraming fans na koponan.

Now rewind. In the 80s and the 90s, Ginebra started to have a cult-like following—almost like a religion! And Jaworski's charisma was close to that of a pope's. There's also that good number of offsprings born to parents who are die-hard Jawo fans, and subsequently, Ginebra fans. These are kids who grew up watching their parents, kuyas, uncles or lolos cheer and breathe (and yes, reeked of) Ginebra! And as they were growing up and learning by imitation, they had to be—by default—become Ginebra fans!

THE GILAS EXPERIENCE
In those years, when we speak about "national team" or "pambansang koponan", it's a no-brainer, that phrase is exclusively pertaining to Ginebra—the people's team! With Jawo at the helm, the team thrives even as underdogs—at times, having discards and unknowns in its roster. And yet, with sheer heart and guts, team Ginebra manages to and ekes out a win or two—and many an instances in a come-from-behind fashion. Hence that indelible Never-Say-Die imprint.

Years went by, and basketball has become more global. With the mandatory FIBA tournaments the country needs to participate in, the phrase "national team" has taken a new if not reclaimed its appropriate definition. And what used to be an underdog experience exclusively attributed to the Ginebra in the PBA, has become the same feeling and experience of cheering for and with THE national team—now in a much bigger and more competitive international stage. Eventually Gilas Pilipinas has captured the sensibilities of every Filipino—if not mostly dormant and nominal—basketball fans, not just within the archipelago, but broader territories with Filipinos now scattered all over the world! It felt like a binding Ginebra experience—the "religion" someone had in his basketball infancy.

Battling the giants of Asia and the world, the Gilas experience had shown some semblance of the Ginebra catechesis that most Pinoy basketball fans learnt and grew up with. Of course, it is not Ginebra, and it's not even fair to compare the two similar but different experiences.


OF CONVERTS AND PROSELYTES
Ginebra remained, and is constantly at the same top position in terms of fan base—through these years. But for some reasons, things have changed. If we are to look at the Ginebra of the present, it definitely is not the underdog team anymore. On-paper it is actually the team to beat! You got several guys standing six-foot seven inches and above (with a seven-footer five times better than an EJ Feihl), plus a bunch of eternal and ageless superstars, spitfire backcourt magicians, and never-before-known hybrids like a Jordan-Pippen rolled into one! There's no Jaworski this time, but how does one fan feel when a winningest champion coach is on your side?

Now, if there is one Ginebra fan who may have just awakened from hyper-sleep, perhaps that fan of old might not be able to identify with this current team. "Where's the heart", that fan might ask. The guts, the brawn ala-Wilmer Ong? The never-say-die? And why are PBA fans laughing nowadays when they hear the words "come-from-behind" and despise the delicious and nutritious "kangkong" every time it is attributed to Ginebra?

But more often than not, nominal Ginebra fans are still Ginebra fans. They may not "practice" being one. Nor care to attend a Manila Clasico Sunday concelebrated mass or one of its games, but still secretly enjoys watching the team—though from a distance (very much like that KBL catholic who never forgets making the sign of the cross). Though some may have "converted" and moved to the other fence for good. They sometimes "hop" from trying one team to another. Today they may cheer for TalkN'Text. Next day, they felt Mahindra is every inch an underdog. Or Alaska with their No-Quit attitude is breathing new life to what is called the NSD of old! It's like attending prayer groups and faith-orientation here and there, left and right, and actually enjoying every bit of it. But then again, you remain—still, a nominal Ginebra fan.

Perhaps, that fan is just waiting for some more "occasions" to unfold. There could be other "K-B-L" instances just about to happen. And this 41st season of the PBA might just be one of them. With the latest build-up (and continuing shake-up of the team), the nominal fan may once more manifest his faith to the team that he was born to cheer for.

And still be a nominal one, who won't give a damn!