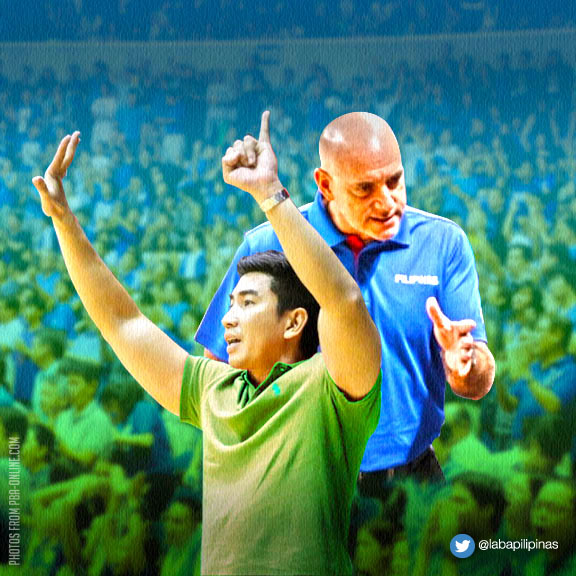 Coach Baldzewski is in the news!

Yey, did that sound close to Coach K's name yet? Alright, not the Pinoy Coach K—because that'd be Coach Pido! But Coach Mike Krzyzewski!

Barring any legal full court press from presumably the Basketball Coaches Against Poreners or BCAP (wait, there's a typo somewhere) everybody knows now that Coach Tab Baldwin is headed to Ateneo. Earlier we had some crazy idea here of goading Coach Tab to file his COC (Certificate of Candidacy) for President.

But we actually didn't see this ADMU gig coming. Rumor mill had Coach Chot, the Mighty Mouse or Ronnie Magsanoc as next in line to replace the endo-ing Coach Bo. There's even this tweet trying to out-scoop everyone: "It's confirm! Louie Alas will coach Ateneo."

Apparently, it's not—well, confirmed (and so that tweet has been deleted since, for obvious verb tense infraction).

Of course we can't talk about Ateneo like we can eat Kare-Kare without the bagoong. Hence, we go to La Salle.

Nobody expected Coach Aldin Ayo's transfer to DLSU. And that perhaps is the reason why Ateneo needed to have their own "magic hugot" coach. Talk about college rivalry, eh?

After giving Letran a championship only in his rookie year as head coach, the name Aldin Ayo has finally overcome what #Aldub fans thought was just a misspelled Alden Richards. He's a McGyver who can do so much more with less (okay fine, millennials be like: who's McGyver?) .

Oh, by the way there's no truth to the allegations that while traversing Taft Avenue, Coach Aldin's Ford Mustang only had Jessie J's "Pricetag" on its playlist until he reached the main gate where—unlike his first day of coaching in Letran—he was immediately recognized by the DLSU guards! Sports scribes wrote in their news stories Two Hundred Fifty Thousand Peysoses per month in three years when pressed for figures. (Reasonable enough to leave Letran as most people have easily concluded and superficially judging the champion coach, that it was all about—Jessie J., err, money! Later as the water gets to clear we know it wasn't the sole consideration.)

That college coaching paycheck is the same if not close to the amount most SMC coaches in the PBA are receiving (although we're curious enough to imagine how Coach Tim Cone will quip right away: "Excuse me noh!"). While some Mahindra Enforcer players were heard in unison: "Perhaps we can just try coaching, diba?"

And we're still looking at college basketball here. Supposedly, an amateur environment—yes, but this is how intense basketball is in the islands of—basketball! Every school especially the richer ones, move heaven and earth just to be competitive and to stay on top. And there's a lot of money, money and money involved so that the figures make you feel like it's a professional league. And we're not yet talking about recruitment (or poaching) of blue chip players from other schools and other leagues. We will be more than overwhelmed to see college varsity kids driving sports cars and have their own fully-furnished condo units. Truly by this manner, the amateurs have gone to the dogs called pro: proselytizing! That is by way of converting the nature and definition of amateurism.

School authorities might say—well, it's the Alumni who actually get all these things done. True, and we see professional club owners who are alumni or in some way connected to these varsity teams which they bankroll, like it is—one of their PBA teams! Corporate rivalry has come a long way at least for the MVP and the SMC groups. Maybe it started way back from their school rivalries which spilled over to the PBA and back again to their respective pet college basketball varsities in the present day.

These two schools are just examples. Of course we're not discounting the moves being done by other colleges and universities (did you just hear that loud shriek say NU?). Also in the news is a college-turned-PBA-now-back-to-amateur-again coach, Franz Pumaren who will call the shots for AdU.

No, those letters do not stand for "Adamson deLasalle University". With Ritualo and Allado as Coach Franz's sidekicks, you really can't help but feel the confusion as they takeover to mentor these dribblers from the street of San Marcelino. And there are other former professional stars and legends who may have found their own niche in coaching various school varsities in the entire country. Now current PBA coaches see these coaches from the amateur ranks as—threats to their positions, especially if the clubs they're calling the shots for aren't winning. Coach Norman Black was aptly quoted in another story here: "You get hired to be fired!" Probably Coach Norman still couldn't believe he authored those lines with Meralco now at the bottom of the PBA Season 41 Philippine Cup!


Now back to Coach K.

Hoop fans know Mike Sha-chef-ski as the famous college coach who eventually called the shots for Team USA made up of pros (now that's way easier than "Krzyzewski", why can't they write his name just like that?). Coach Baldzewski's situation, however is the other way around.

But because of the strong and burning desire to compete and win, for some reasons, Ateneo—or more like MVP—appointed Coach Tab as head coach. Of course the entire solar system knows who's footing the bill for CTB's 4-year coaching contract in the Philippines. There's an ongoing debate about his eligibility. If you're for foreign coaches handling local basketball clubs, perhaps BCAP's rule book needs a timely revision, and you easily count that shot! But if you are the hardcore nationalist it's time to call a Flagrant foul 2 on this infraction! While #Hardcore2TheBones Gilas fans whistled a travel: "No way, he can't make that step from Gilas to Ateneo and then back and forth!"

Sounds like a mess. But that's how crazy about basketball we Filipinos are so that we get to do crazier stuffs sometimes in our joy to compete and play this game we love. The confusion, surprises and circumvention of rules in the country's most popular leagues are somehow true even at the barangay level and down to other lesser-known inter-school tournaments.

Basketball fans either love, hate and love again this scene. And this makes the hoops landscape a lot more interesting here in the Philippines! Just like when amateurs behave like pros while some professionals finding greener pastures over at a cozy amateur backyard!