What Will The Pacman Wear? 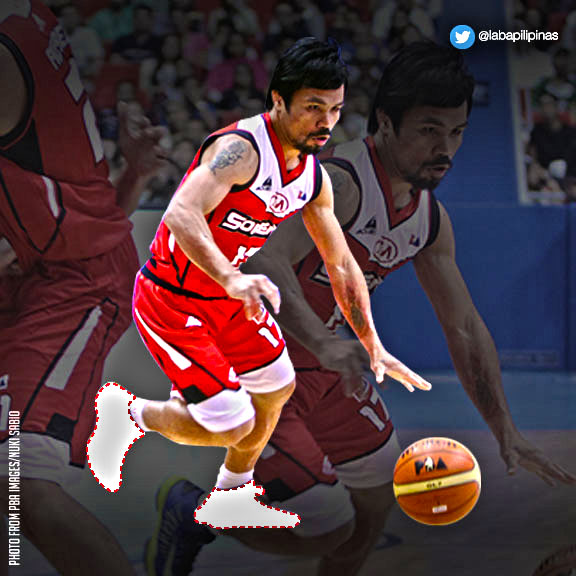 We've heard, read, tweeted, facebooked almost everything about the current Manny Pacquiao issue. Instead of dwelling on a very tacky subject matter about religion, morals, sexuality and all—well—maybe let's just focus on the stuff that somehow binds us all without a doubt and prejudice—sports!

In this case, basketball!

Well, Pacman is actually a boxer. That's his bread and butter. But lest we forget, he's been unofficially declared the mascot of the Philippine Basketball Association by the current commissioner. Ooops, erase that. I just got a text message from Kume. Even before I could press a period at the end of this very sentence, I've been banned already! (Now, I will need to bring the whole family including our dog perhaps tomorrow to the PBA office to apologize, right?)

Now on a more serious note. Manny Pacquiao is still listed as a professional basketball player with the Mahindra Enforcers (and also Head Coach, would you believe—what can this guy NOT do). And will he still wear Nike when he plays? But the more pressing question is, are we going to see him play anytime sooner? Wouldn't he be "banned" by the COMELEC from seeing action on the hardcourt since he is gunning for a national post this May? And of course he's got a fight with Bradley on April so he must be in the thick of training and preparations. Although last time he was in training he was able to sneak in a game or two for KIA.

Let's take a look at the possibility of seeing the Pacman wearing a brand not called Nike.

1. UNDER ARMOUR
He's BFF with Steph Curry—the face of UA. And like the Pacman, Steph is also very vocal about his Christian faith. Perhaps they have a room for the Pacman considering this. And his chief trainer, Freddie Roach is wearing UA for quite some time, right? UA has been very successful with their campaign (well, their kicks have been ripped off a million times, just look around; the thing is when you see your brand sold as "Class A" in Divisoria, Greenhills and other tiangges, then congratulations for a very successful brand campaign!).

However, being an American brand like Nike, it may may be on the all-inclusive side of things, which includes the LGBT community as there are a lot of great athletes and personalities from this sector. Anyway, how would the Pacman look on these kicks, let's try! 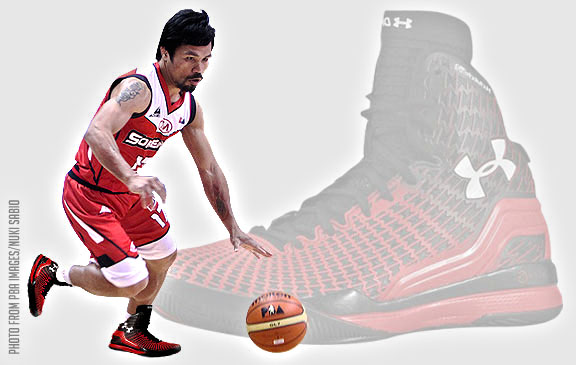 2. ADIDAS
It's pretty much like Nike. Although not an American brand, it's even a lot more liberal when it comes to its marketing philosophy. So it's probably like Nike in embracing inclusivity and everything colorful and careful enough not to be associated with some sort of gay slurs or discrimination of a particular sector. The brand promotes other great athletes in various disciplines. They are also a leader in other sports apparel. So getting Pacquiao may not be a very sound marketing move for them. But who knows what they're thinking. Let's see how Photoshop brings us closer to this idea. 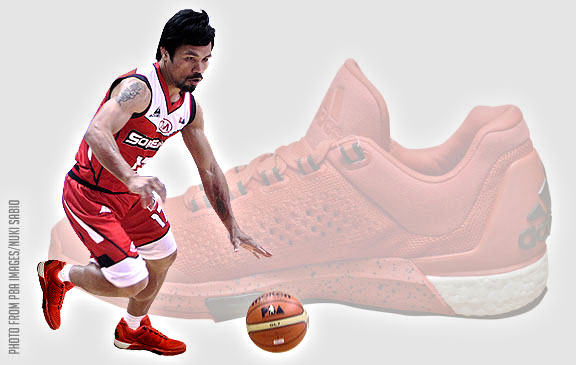 3. Popular Chinese Brands (Li-Ning or Peak)
There's no doubt the Chinese brand is becoming more ubiquitous these days. And they're not stopping from luring big stars to wear their kicks. Dwyane Wade, Tony Parker, Klay Thompson, who else are wearing these brands right now?

(For a while I thought Peak just makes towels. As we see a lot of FIBA basketball, we see more Peak towels during games than shoes actually!)

But hold your breath, Pacquiao is a Filipino. Oh, it's another global issue there with regards to maritime disputes and all that. But who knows, perhaps it's a probability. (And for quite a while Manny has been endorsing a Chinese smartphone brand anyway.) For instance "Peak" and "Pac" are well—homonymous (no pun intended here guys). They can eventually launch a "Peak-Man" line of apparel, right? Let's see how the playing-coach fare in these kicks. 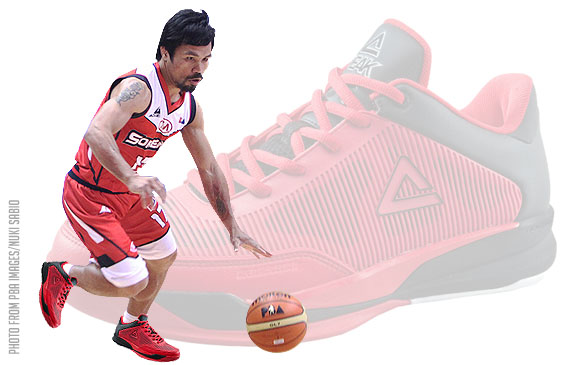 4. Go Pinoy!
Now when the Chinese brands won't work, let's get down to this (it's like ALL if not most brands including the Filipino shoes are all made in China, right?). The social media was abuzz right away with Grosby, Kaypee, and well—Mighty Kid (apologies to the millenials for such unfamiliarity, if confusions persist—just GMG!).

Why not try a Filipino brand, instead? We haven't even mentioned the stuffs from Natasha, Boardwalk and other direct-selling businesses out there that have basketball shoes among other products in their catalogues (how about Liliw shoes, about time they make basketball shoes too). And we almost forgot to mention World Balance or Accel that are equally vibrant in the shoe market nowadays. 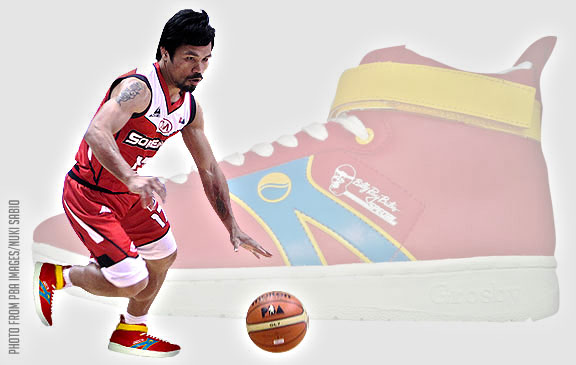 How about you mga ka-fans, what's your take on this? Did we miss a particular brand that the Pacman could wear? Hit the comments for your suggestions.