Numbers Do Or Don't Lie? 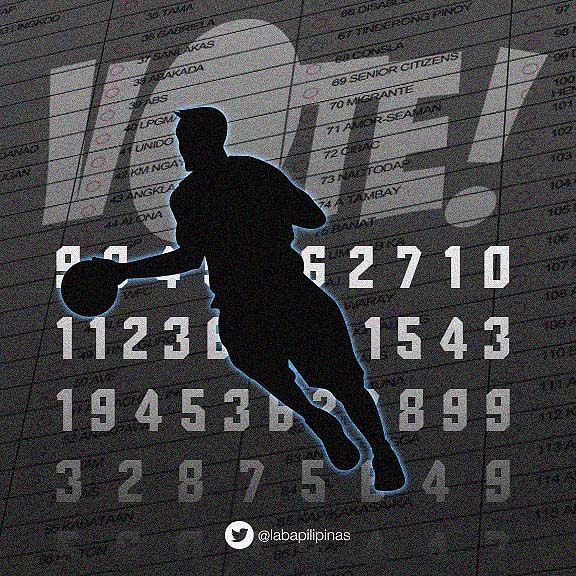 There's just five of them. At this juncture, we already know who these candidates running for the presidency are (as well as those vying for VP).

But lest we forget there are senators that we have to elect. (Yeah, heard some guys out there shout from the top of their lungs: Manny Pacquiao!) There's a dozen vacant seats awaiting them at the Senate. But there's like 50-ish candidates and do you know each of them? I bet it's hard to remember all. Why, Kilala mo ba si Win?

Except for those who are popular enough (read: rich enough to afford tons of TVC). Otherwise it's really hard to remember and earmark each candidate the moment you are there in the voting precinct ready to shade the oval next to the corresponding number and name.

As a country mad about basketball we can also go crazy with numbers (such as stats and averages—and well, there's ending!). Now what if these senatorial aspirants (or even Party-List groups) pair themselves with these famous pro ballers and their jersey numbers for a much needed number and name-recall.

Imagine if you are candidate number 47 and you get Mark "The Spark" Caguioa to boost your awareness, how cool is that? The moment a hoop fan goes to vote, he remembers Caguioa, wearing Barangay Ginebra Kings jersey number 47 and as the voter holds the Comelec official ballot, his finger slides fast like receiving an outlet pass from Greg Slaughter rushing for the fastbreak then goes to the number "47" and the oval next to it. He shades it. Bingo! One down. 11 more to go! But that was fast.

But wait, who's that #47 beneficiary among the senatoriables? Lo and behold, he's the former MMDA Chair (oh there, you remembered them Playgirls twerking) Francis Tolentino!

(Disclaimer: we're not here to promote or endorse any particular candidate. We're just randomly picking famous jersey numbers in Philippine Basketball and their corresponding assigned senatorial and Party-List numbers OR vice versa. By the way, since the Comelec website's been down as of this writing, we're getting the official list of names and their respective numbers here.)

How about Calvin Abueva? He wears jersey number 8. And taraaan, look what we have here: Walden Bello (now we see some young voters smirk and say: "Da who? Walden ng WalDub?"). Is there any semblance or connection whatsoever? Not sure if "The Beast" rubs off anything to this particular senatoriable. Anybody is free to have their own interpretation and impressions.

Next, let's pick one of PBA's hottest stars: Terrence Romeo. He's wearing Jaworski's iconic 7. Yes, it's almost sacrilegious to wear this number at your back. But if you're a Romeo, fine! If you were senator-candidate Greco Belgica you'd be very glad to have your candidate number 7 associated with The Bro, who wouldn't? Imagine printing a propaganda with Terrence wearing Globalport Batang Pier jersey next to the candidate Belgica. And the girls and boys probably will just go wild! And pray it translates into significant number of votes come election time.

Now how about this one: 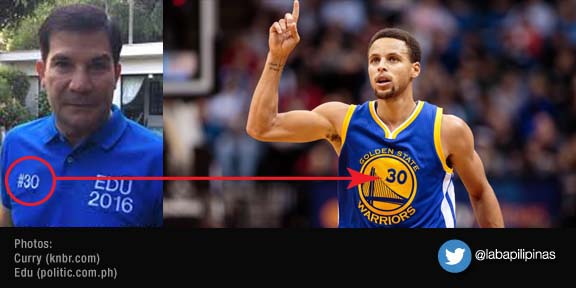 Ooops, let's stick to locals, okay? But thanks for gracing the show, Steph! And since it's financially unviable to get Steph for this, maybe Mr. Manzano can try Erik Menk who also dons jersey number 30. Yes sir, Menk's still playing in the PBA! You can also try Beau Belga! (And by the way it remains a chismis that Curry is a #DU30 secret campaign contributor!)

Let's try from the Party-List group. This is even messier, more than a hundred of them in the choices. The names are just too confusing and hard to remember. I think they need this numbers-matching more than the senator wannabes do! Okay, let's pick a number.

And we have: 29! And the Comelec list assigns #29 to this Party-List group: PBB (Partido Ng Bayan ang Bida). Wait, isn't that the relative of PBA Season 41 slogan "Liga ng mga Bida"? And of course, who's famous for jersey number 29 in the PBA. It's actually a perfect pair and matches the Arwind Santos branding—SMB's very own bida, in many an instances, right? Back to that party list group's name, it sounds more like a click-bait or something fishy we don't know. So choose and discern wisely, guys!

And there you go. Sure, you got your own mnemonics for your Magic 12 or Party-List of choice. You can start listing your own roster—in order to save you time and for remembering your choices easily.

But please don't base them just because you love certain players and therefore create a "Senatoriable Mythical Team" out of them, like this one: 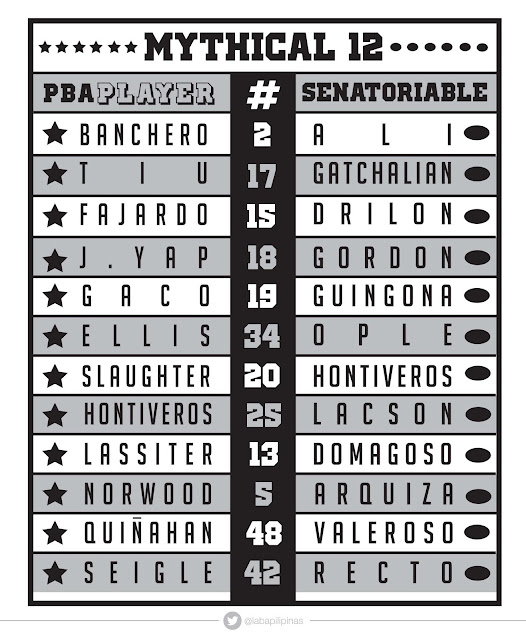 Feel free to share yours. Perhaps we can learn and be inspired by your numbers-matching as well. Or better yet, "copy" nalang like what that presidentiable used to say during debates!