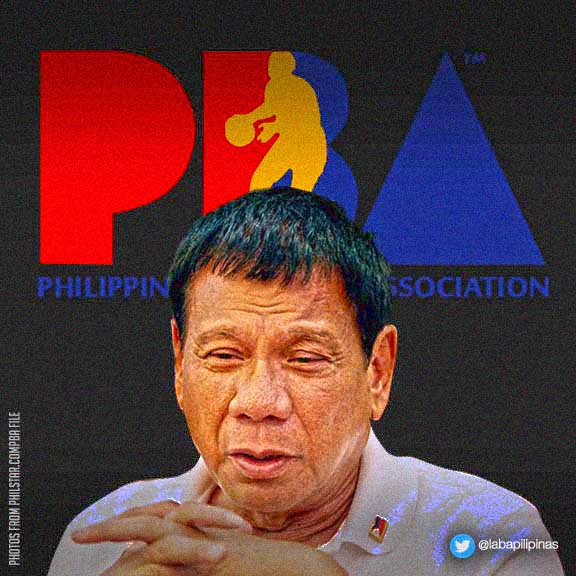 Hello there fellow PBA fans (and non-fans)! What if President-Elect Rodrigo Duterte is actually THE Philippine Basketball Association's current commissioner?

Oh come on, you still with me?— if you're not too busy, then let's go sago!

Here are 10 THINGS we probably can expect from a Duterte Commissionership in Asia's first professional basketball league:

1. Midnight Deals & Meals
When this happens expect a lot of press conferences beginning at midnight. Just when press people are supposed to be in dreamland here they are—writers, photographers and all—paying close attention to what feels like watching an early morning livestream of a Gilas game straight from Europe. Although some sports writers may just find this like the usual late night chit-chat over a few bottles of beer and sisig.

2. Trash Talks & (Flip)Flopping
Expect a lot of trash talks and cussing to make games more exciting. Why will the Kume reprimand players when he himself is so comfortable talking with so much flavour and spice and everything nice. This way PBA will be more pang-masa as more people can relate. As to the flopping, well it all is fine! Even flip-flopping for referees is okay. They can apologize later on and say: "That call was a joke! Better luck next game!" Ouuuch...

3. Truth Sets Free
Kume Digong is known for speaking uninhibitedly. He speaks his mind and wouldn't care less about the repercussions of his statements. Perhaps at some point he'll easily call out pabebe PBA owners and executives. Or probably fires Mahindra playing-coach slash retired boxer slash evangelist slash... (enough, we get it he's the ultimate Jack of all trades) Manny Pacquiao and let him be a master of one and that's working in the Senate once and for all!

4. Courtside Catcalls
Expect a bevy of sultry PBA courtside reporters (Kim Domingo and the likes may apply)! There's also a chance that more female referees could replace the male. Talk about gender equality and empowerment huh, and the Kume with his relevant women-centered ordinances in Davao can simply implement similar measures within the four walls of the PBA. Oh by the way, expect a lot of catcalling and similar stuffs on and off the court! Hot PBA players' wives who flock to the games should be warned as well about this impending new brand of Pinoy hoops culture.

5. BFFs over TORs
If you badly want to work at the PBA Office, fret not, there's no need to fake diplomas and Transcript of Records! BFFs are shoo-ins at the Commissioner's Office. (On a sour note however there's no item available if your name's "Leni", as it may hurt the feelings of a friend of the commissioner who happens to be very very close to his heart.)

6. Bring in the Crowd
Commish Rody—a certified crowd drawer can assure the PBA owners of a consistently jam-packed PBA playing venues! Halftime entertainments will be courtesy of Mocha Uson's very influential girl group. Ka Freddie may also sing from time to time if his schedule permits (there's a 100% chance he'll compose and record the new PBA jingle to the tune of "Ipaglalaban Ko", how about that?) The crowd might have a sighting of Robin Padilla sooner or later as he heads the Security.

7. Ban No More!
No more banning of journalists. This for sure will delight one controversial writer. The PBA Media Bureau will be headed by no less than Atty. Sal Panelo! Talk about a culture of winning right in the midst of the PBA, right? Panalo! However Duterte's view on media executions encompasses not just to those who are covering politics. Straight from the horse's mouth he issued this sweeping warning to all journos: "Corrupt journalists asked for it!"

8. INClusive Venue
Philippine Arena is the new home of the PBA. This part, well—it's self-explanatory!

9. Sino-Diplomacy
Say bye-bye to American imports. Yes to Chinese reinforcements! A Duterte PBA commissioner will see to it that we maintain healthy ties with China. So we look forward to having Zhou Qi, Yi Jianlian, Guo Ailun, Wang Zhelin strutting their games in Ginebra, Meralco, San Miguel or Blackwater uniforms. There's also a remote possibility that Yao Ming will own a PBA team!

10. Nothing But the Best for Gilas

Of course, Duterte is a self-confessed Gilas fan bar none! Only the best for Gilas otherwise Kume Digong kicks out club owners and teams not supportive of the National Team. Say goodbye to "injuries" and "mga bagay na di-kontrolado"! He will then tell the SBP to scrap what he deems as p#t*n&@ Gilas Cadets program. So welcome to the PBA right away for Kiefer and the gang! And we expect another powerhouse Gilas Pilipinas team no matter how disruptive the new FIBA calendar will be.

We're back to where we are right now. And in reality we still have a very interesting and intensely colourful CEO and Commissioner Chito Narvasa.