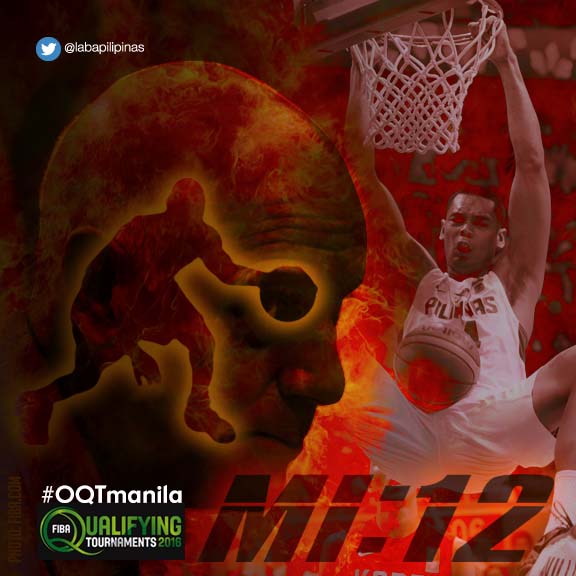 With few days before the FIBA Olympic Qualifiers, many of us still feel that this is just too daunting a task for our version 4.0 of our #Gilas12. If we were to make the Olympics it should’ve been much earlier. It’s a classic naiwan ng last trip syndrome. But that’s another #CryingJordan over spilled milk. Which just brings back a lot of hatred, if not animosity. All negativity of sorts. We can easily name it, bullet for bullet, tweet for tweet. Let’s just get over it and be mindful of what’s in the NOW.

#FIBAOQT Manila is a very dangerous uphill climb. This time we’re not simply climbing the Mount Apo on its easy trails. But our team’s bracing for a Mount Everest ascend—on a very bad weather!

So what can we do, but face this ordeal. Here’s a dozen Ethan Hunts about to go crazy once again to fulfill a mission. Crazier than hanging on an ascending jumbo jet. Or scaling with bare hands a skyscraper. Holding breath underwater beyond human capabilities. Wreck-drive a sports car at a blinding speed. And yet needs to come out alive victoriously for the usual mission-accomplished cinematic ending!

Matter of fact, our MI:12 has a crazier ambition than Hunt’s and his team. Makes us look even crazier after having been blown out by taller European teams just recently. And here we are preparing for a short tournament with such quality of opponents that just disrespected our basketball talents at its deepest core if we are to exaggerate.

Still many among us would say we’re just good for the ASEAN hoops. Not to be rude enough, perhaps at the Asian level. Having to prove otherwise, it was a consolation to see our team beat fair and square the China team that denied us the ticket to Rio. Well, there go the pessimists saying that Chinese team wasn’t complete or so without their notable superstars. Heck, a win is a win. And no matter if that is a tune-up or not, we will always have an axe to grind against Team China, right? And true, that friendly was all about pride. It’s a fitting statement that we are best in the East. In that pocket tourney in Bologna, Italy, all teams (Philippines, Canada and Italy) but China are gasping for a last breathe to Rio. (And yet look who came out winless from that series of friendly).

Back home we pensively wait. And these few days before the Manila #FIBAOQT tipoff will be the calm before the storm. Our MI:12 will have their gears ready for this death-defying ascent.

Now, what else can we do but rally behind our MI:12 as they take on this very impossible mission. So insurmountable that human logic denies us of understanding how it is going to be done and accomplished. And still become victorious in the end. So much so that at this juncture of so called insanity it’s only faith that will make us hold on and grab onto a very tiny string of hope. But who knows, after all, bilog ang bola!

Hail to the crazy ones! Laban Pilipinas! Puso!