Save The User Jail The Poser! 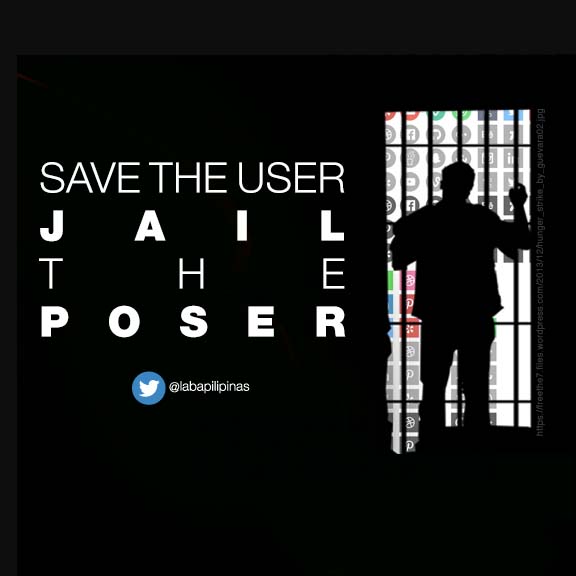 It's just so timely. President Digong – just in his rookie year – has intensified the fight against drugs.

Teka lang, we're not here to talk about politics. It's not also about drugs.

Let's talk about our favorite Pinoy hoops stars and social media. Being a fan today has become so damn different than – say ten or so years ago. Okay, let's just say back in the time of Big J and El Presidente. Fine, maybe Meneses and Duremdes era. Perhaps Taulava and Caguioa (oops, but these vinos still play significant minutes, come on – so let's erase that).

What used to be a beer or any drink in one hand while watching the games has become that favorite object our fingers love to fondle a lot lately: Taraaan... smartphones!

Either we watch the games live or at home or elsewhere, more often than not we fans love to interact—and now, by way of Facebook and Twitter! It's a modern-day heckling. Or cheering for our favorite teams and players. Trashtalking other fans in your timelines or groups. Even referees are sacred cows no more! Commissioner, anyone? Heck even TV commercials, right? (Remember Eskinol Master and Paul Lee's double-crossover? Ohyeah, we came to a point that we loathed that ad on twitter during halftimes. And no PBA player bought the Leethal Weapon's first crossover move while the ad was on-air.)

Social media has bridged the gap between superstars and us lower-life forms called fans. The old school stalking was difficult and dangerous. Now it's way easier. We just need to click "follow". Then we see what food our idols had for breakfast, lunch and dinner. We know their whereabouts by just looking at these so called feeds. We learn about their relationships. Family. We were surprised that behind his macho physique, idol loves pink and Taylor Swift! It's an instant slam book and it gets updated every second. We easily empathise when they rant about something. We were there when they were down. And their victories we shared as well. But we jeered them for their four-feat Boracay Cup appearance, aminin! 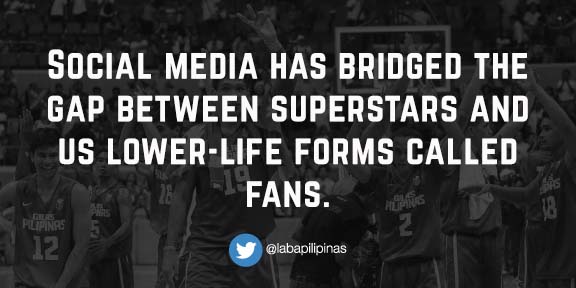 But what if these idols start to sell you fake rubber shoes like the regular online-suki reseller? How weird so that these demigods start soliciting everyone's meager savings for a dubious fund-raising event? And what if these superstars that you follow full-time on Twitter are NOT them, actually?

Daaang, you and the real idol say, "Jail the poser!" You've been had. All the while you thought you were following Calvin Abueva. You consoled him when he got cut from the Gilas 4.0 Final 12. You tagged him every Joel Osteen quotes and memes you came across the internet, believing your idol just needed every doze of it.  But your world shatters right away when Carlo Pamintuan – a.k.a. The Gilas insider – tells us that Calvin has no Twitter account. And f*ck, you say and all the swears even double or more than what President Duterte can utter in a single sentence. Now you remember the last time you felt this way. The same feelings when your ex-boyfriend you thought was single was in fact not supposed to mingle!

Now you start to become rational as you wondered how come Stanley Pringle posted an update on Twitter while he's playing on the court right about now?! Perhaps his staff is doing it on his behalf? But no, you become critical. And yes as fans we need to be more conscientious.

The recently concluded #FIBAOQT has placed our local stars side by side with some of the best ballers in the planet. And even though our beloved Gilas didn't get the job done we fans were consoled in a way that our idols can go head to head with these giants. But there's one big glaring difference the moment we see them altogether on Twitter, for instance. Our fabled PBA idols on social media are NOT–yet–verified. While Tony, Boris, Nando, Tai, Tristan, Omer, Cory and many of them got that blue check icon across their names. What does it guarantee us fans? Simple: it's the real them! They're not posers.

Wonder if PBA is taking initiatives talking to Twitter about this concern. Aside from Chris Tiu, who among our PBA idols are Twitter-verified? The NBA saw this social media surge coming and they did the right thing with regards to players' Twitter accounts!

Hopefully the PBA gets this into their agenda (we know their hands are full and might be having sleepless nights for nearly two months completing the schedule of the imminent season-ender conference). Because it's just about time. Let's get rid of posers and fakes. Of course the parodies will always have to exist alongside them (sometimes they're more fun, right?).

Your thoughts mga ka-fans? Care to share your funny interactions with fakes and posers? How did you slay and burn when you figured out it's not them? Hit the comments and let's make fun of them effin'posers.