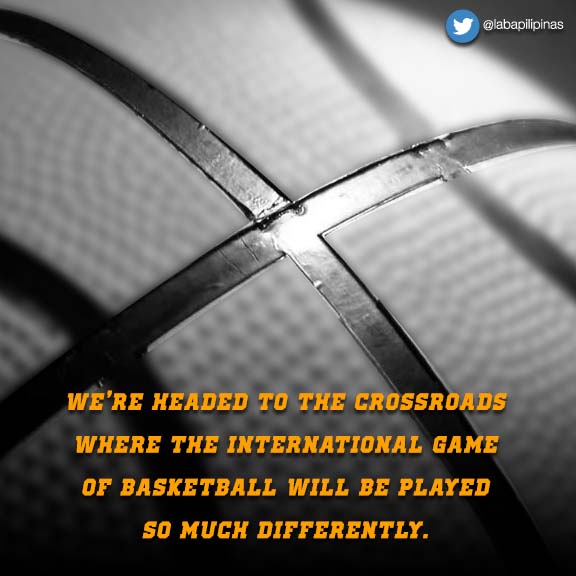 Okay, perhaps we're just overreacting given the back to back (to back) losses our Gilas 5.0, err, Gilas Cadets, aah GILA5.0—now what are these bunch of guys really called?—have incurred in the on-going FIBA Asia Challenge tournament in Iran.

Okay fine, relax fellow doomsayers, this is not some kind of a big tournament they say. Perhaps just the right opportunity to send in the Paranaque Jets whoever is available at this very busy basketball juncture in the Philippines. While the rest of the basketball leagues globally are in an off-season, we're having a basketball field day left and right. Sometimes you don't know anymore which games to watch. Even the NAASCU and CESAFI are aired on national televisions! And you guessed it right, with the PBA already struggling for some attention, now this situation gives the PBA more onus to compete for viewership against these college leagues that are actually like semi-pro leagues with all the commercial sponsors surrounding them. Just look at the college jerseys (yes, front and back). The TV coverage. It's not just about school, right? Ka-ching!

These three losses in a row we just had against India (yes, India!), Chinese Taipei and China (but hey, the Chinese never got the W from us on a silver platter) console us fans that we should be even prouder of our very gallant boys (yes, boys, like they're little leaguers). Of course, there should never be a debate as to whether or not we support this version of Gilas Pilipinas. No matter who these personas are behind the jerseys they wear, as Filipinos, it is imperative that we should go all-out for our team!

BUT, we must refrain from such excuse by calling them "young" or "kids". These guys are not a bunch of teenagers! The average age of our #FibaAsiaChallenge team is like 23 or 24 years old! And boy, most of them are (supposedly) college graduates even before the implementation of the K to 12 program. Before there was K-12 the average college grad age should be about 19, 20 or 21 years old (depends on the course and academic performance). But you know the situation in the #PHI college hoops. The schools seem to let these "kids" play probably until they finish their PhDs! While their counterparts in Asia and the rest of the world have been playing pro at the early age of 16 or 18! Of course we would know the very big difference in terms of player development.

Now back to the PBA. Let's play some devil's advocate and just like old times tap it as the scapegoat for this messy basketball landscape in our country (or maybe inconsistent Senior National Team program that is Gilas). It's a good thing the league has lowered already the drafting age from 23 to 21 years old. However if a draftee is under 21, he must be damn smart to finish college already then he can try his luck! Uhm, with all these college leagues (and players?) earning so much nowadays who would want to let go of a blue chip to the pros just like that?

How about the PBA changing the rules again? Lower it some more? Perhaps anyone finishing Grade 12 can be drafted already, ala-Lebron, Kobe et al style!

But no, the PBA has a D-League. Kids should stay there for some time, while the veterans should make hay while the sun favourably shines on them!

Unfortunately we have this culture of salimpusa (well, seniority actually). The PBA is THE men's club. Therefore there can't be mixing the boys amongst men! So true also with our National Team. Hey, you're 18, you can't make the Gilas senior team, okay? I'm sure many of us experienced this as a kid in the neighborhood playground. You can't just join the big boys or girls play. Unless you own the ball (or the court) and the kuyas or ates got nothing to play with then, as a consolation you're in!


Now what if the PBA suddenly overhauls itself? Make the league bigger with more teams. How about eat its pride and finally heed a clamour to go regional like what MBA did? Adapt to the changing times. For sure it's having a real struggle battling out the college leagues neck and neck in terms of revenues and viewership. And of course give premium to our National Team! The success of Gilas will definitely spillover to a PBA success. Who wouldn't love to play in a league where these Gilas guys are playing in? If you're a talented college (or high school) kid why spend the rest of your life in school when you know your gift and calling is to play ball professionally. Then head straight to the PBA! The older PBA players should take this as a real challenge as well. The kuyas must play well! Otherwise...

Consequently with the PBA's newfound success for sure the college leagues will be rethinking about its business approach. And perhaps we'll see more praxis of amateurism in the college ranks, AGAIN! Not a semi-pro league like how we feel it is nowadays.

Just like in some failed relationships it's sometimes easy to identify who and what went wrong.

It would've felt so much better watching our pro ballers don the Gilas kits in the #FibaAsiaChallenge and trash these opponents by a mile! But of course we need to give chance to these aspiring ballers, call them a ragtag team—yes—but National Team development has to get there and start somewhere, right?  The current situation stirs the mind of us fans, as well as all stakeholders concerned. Are these the kind of guys we really want to invest in for the long haul? Belo and Perez look promising. Should Van Opstal pursue modelling and showbiz instead? How about the rest?

We're headed to the crossroads where the international game of basketball will be played so much differently. And we pray and hope that the success we have gained these past few years won't be put to waste and lead us—a mad about hoops country—back into oblivion!

Perhaps the most convenient reaction is to just pass the blame on the PBA. Had they not been so stringent about lending players to Gilas, blah-blah-blah...

Just like a random person found dead with a placard along murky and dark alleys we see in the news everyday. Aaah, but the dead won't speak to defend oneself. That's why. It is not totally fair to throw the blame just like that, right?

Kindly head on to the comments below to drop your two cents.