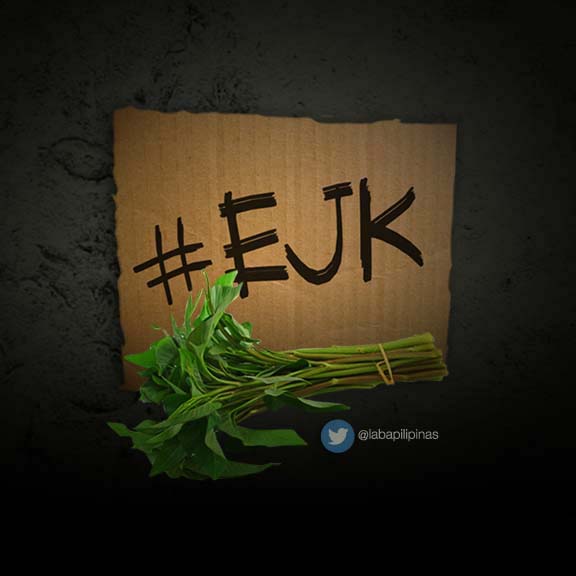 (Disclaimer: This is not a mesh of sports and politics.)

Now before we get deeper in this politics-sports-pineapple-pen debate, here is the real title actually: "Hashtag EJK: End Jokes on Kangkong"

So enough using that creative imagination!

Barangay Ginebra Kings is finally back in the Finals. It took two sitting presidents (and a death of a president-we-never-had) for the Gin Kings to put them in a position to win a championship! Of course it's as common knowledge as pope-is-not-a-woman that people associated the nutritious water spinach with the super most popular team on this side of solar system! Add to that they’re a perennial suki at the all-season "Bora Cup".

So now Ginebra is just four wins away from another championship, this Kangkong joke must come to an end. Even in the midst of such conspiracy theories that the PBA manipulated the result of the TNT KaTropa and Meralco Bolts semifinals series. So that the Gin Kings would face a less formidable Meralco than duel with a hot shooting Gilas Pilipinas TNT KaTropa!

BUT Ginebra must not be robbed off its effort in defeating sister-team San Miguel Beermen. Clearly they fought fair, square and with so much hunger to win the #TeamSMC semifinals series. Of course, from the start, a greater majority wished and prayed that it's going to be Ginebra (except for some wives of SMC Beermen players who probably did not receive the memorandum circular). And there's one person to be credited for the season-ender finals casting: Gary David! (For those unaware, El Granada's previous team was, *cough* Meralco!)

Now here's another #EJK for us: "Ecstatic Jubilant Kume!"

PBA just needed a lifesaver. Early in the conference the PBA games on television felt like a showcase of chairs! Yes, empty chairs. And that was punctuated by the bleak and near-empty PBA All-Star weekend festivities! While Meralco looks to bring in the drums and its linemen, a Ginebra finals appearance promises to bring the crowd back in to the venues! And there's one person who'd be more than Ecstatic and Jubilant as Kume Chito Narvasa himself! Ohyeah, ka-ching!

Now an observer would like to find out what went wrong with the TNT KaTropa. They were like Golden State Warriors last NBA season holding on to a record 73 and 9 with their 10 and 1 in the eliminations. But like the Warriors blowing a 3-1 advantage they seemed to have thrown it out of the window too. The conspiracy theorists believed Meralco was just there pretending to play and was short of giving the Finals in a silver platter after the game one onslaught of the #TeamMVP televised training camp semis series. Now who’s to blame for such fate? Someone answered, hashtag EJK: “Eh si Jong Kasi”

Now on to the finals matches! In the next few days and nights let our conversations be just about Pinoy basketball. Forget about the in-aid-of-legislation-hearings going on left and right. May the loud, wild and intense finals cover our ears from a fastidious and glib president or a wailing senator. And if there’ll be more #EJKs then let the Mighty Mouse come to play: Expect Jimmy’s Killer threes!

Happy #PBAFinals mga ka-fans. Which team you rooting for? Did we miss the other interesting “EJKs”?