The Alien Has Arrived 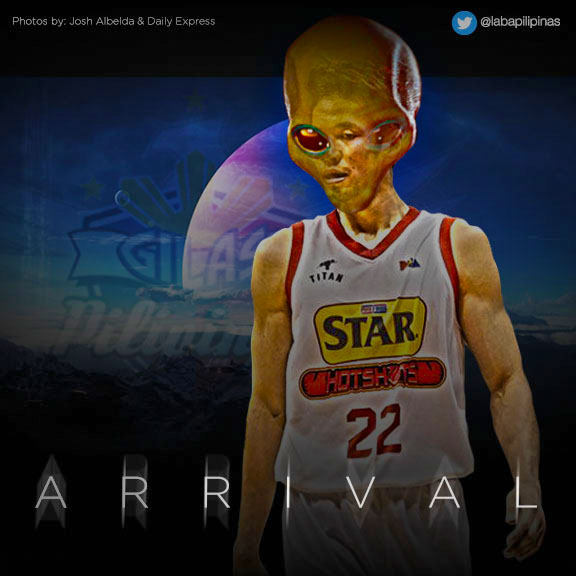 He was never called that way as far as (Quinito Henson is) our feeble minds are concerned.

Talking about Allein Maliksi here. Yeah, that infamous #ManilaClasiCOOK episode must be ringing until now, for a few. Come on guys, he was just going by the trend and had a bite of some pie called #AlternativeFacts. That culinary gesture was a mnemonic intended for his teammates back then. Of course in the end he had a share to the ever-growing PBA fines, (retracted testimonies,) apologies and all.

The bigger picture: it's a break of dawn—a very promising campaign for his team, in a post-James Yap era this PBA season. Lest we forget (unlike many former collegiate bluechips now in the PBA) this guy's been having a career season so far!

Now, Allein has arrived. And arrive he did not just within the Purefoods Star Hotshots scheme of things. But man, he cracked an elusive spot, no less than the Gilas Pilipinas training pool! Of course, thanks but no thanks to the circumstance that sidelined Paul Lee for the moment. Gilas loves Paul Lee. He's our so-called "Chinese-killer" if only for that Fiba Asia Cup ice-in-his-veins three consecutive free throws with no time left. And the bronze! We needed guys like the Leethal Weapon. Perhaps we need him more now with the looming threat of losing Benham Rise!

But we're glad we have Maliksi. Tall. Great shooting touch. And one of the PBA's quickest and most agile ("maliksi", right?). But then, many might still "alienate" him during Gilas discussions. Actually what keeps us from having Maliksi in our Gilas instant wish list is the "one player per PBA team" concession.

So then, we hope and pray all of our Gilas training pool players stay healthy. We hate it when we lose someone to injuries at the onset of a training camp. Happened last time with Kelly Williams. And now, Art dela Cruz. What's with this first day training injuries? Let's break this curse! Perhaps run some rituals to drive away the evil spirits? Why didn't Chooks-to-Go send some chicken and do the spirit-cleansing before the camp started?  Aaah, whatever.

Gilas season is upon us. We're hoping it could be a longer period. It feels great to be cheering for one team at least once in a year. As opposed to cheering against each other for what, 10 or 11 months of PBA? Wow, are we the longest running sports tournament in a year in the entire solar system? Pity these players, the wear and tear may just let them play for fewer professional years.

Now back to that alien—woops, it's Allein—we're talking about. Do you like this addition to our Gilas pool? Or still alienate such talent?