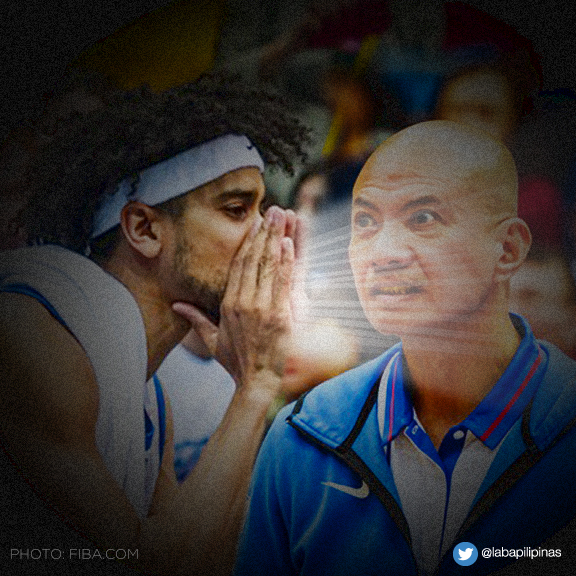 EHEM! Are we really #FIBAWC bound? Because it seems we're not. While most teams gather and prepare, doing tune-ups already, adding notable stars to their pool, even a couple of National Teams joining the NBA Summer League—our Gilas pool is struggling with attendance as they begin to call the weekly practice. What used to be a "small ball" handicap for Gilas Pilipinas has now become "small attendance" obstacle!


Was qualifying the END and NOT really the World Cup participation itself? Why do we feel like we're reluctant about joining this year's World Cup?  The energy has been extremely different the last time Gilas was World Cup-bound where the PUSO battlecry was made known globally, and Filipinos crowned the Most Valuable Fans in the world! Of course the momentum fired up when we won FIBA Asia silver at the MOA Arena thereby punching our ticket to Spain. But this time, it seems there's no hunger. No thirst. No excitement. We barely made the cut. Save for the last minute inclusion of Blatche. And nail-biting games during the last window of the qualifiers.  Pasang-awa, many say. But still made it to the World Cup. So, pwede na?

It's less than a hundred days before the biggest basketball event in the world. But here we are actually busy with our domestic basketball affairs. We're super mad about hoops. But in context, it's just our own hoops we're mad about. We haven't sent one homegrown yet to the NBA. We're hoping and praying every Wednesday in Baclaran that Kai Sotto will make history. We're crazy about basketball but we don't send our strongest arsenal to the international wars. Because more often than not, the best talents are elsewhere preoccupied or tied up with the never ending season called the PBA. College basketball is another commodity that adds more to that complication.

BUT THIS TIME, IT SEEMS THERE'S NO HUNGER. NO THIRST. NO EXCITEMENT. WE BARELY MADE THE CUT.

Going to the World Cup ill-prepared will definitely make us look ugly—a country priding itself as basketball hotbed and co-hosts for the next FIBA World Cup. Presently we still don't have a pool to begin with. Castro has officially begged off. Ray Parks would've been a great addition. But he's also not throwing his name into the mix. Blatche would've been here early grinding by way of an import role in the PBA Commisioner's Cup. But they didn't make it happen for some reasons. Sayang, would've been an ideal situation having our naturalized player in game shape and at the Gilas's fingertips come weekly pratices. Remy Martin of ASU Sun Devils would've been a tremendous inclusion to the pool. And the kid is very much willing to wear PILIPINAS right across his chest. But our basketball federation didn't do their homework much earlier barring any chances for Martin to make it to this year's #FIBAWC. Of course Jordan Clarkson would've been a consolation if not for the stupid eligibility rules.

Enough with the would've-beens and could've-beens. Now if we proceed with this kind of traction we're having right now, Gilas IS in for some humiliation, embarrassment and chances are we will not perform at par with the competition. Well, unless we do get lucky—say, Pogoy, Lassiter and every Gilas player shoot the lights out in China. If we ambushed teams in the previous FIBA World Cup (and almost won some close games against powerhouse teams), this time we're looking at a sharp curve with much fear and apprehension knowing that the enemy is just around the corner—ready to snipe!

But let's try to see whatever silver lining there is amidst this languor. Maybe it's too "early" for us to get things going really. And we Pinoys are in fact notable "crammers" ever since. We got exams in a week. We chill. We study the night before. We got deadlines at work. Relax. We burn the midnight oil and still deliver excellent results. We have an imminent typhoon—hold my beer!—let's do the evacuation when the typhoon landfalls!

But man, this IS the World Cup of Basketball. This is the grandest stage our basketball heroes can reach and show what they got. We long to see another Gabe Norwood posterizing a Scola which we can turn into gifs for the rest of our lives! We can't just show up to a strictly bow tie parties wearing a t-shirt, maong and tsinelas! Of course, we're not expected to win all to begin with. Realistically, it is next to impossible for us to beat Serbia and Italy in our group. Heck, even Angola is not a mile close to saying a sure win. But, bilog and bola, we always say that. And luck comes with great preparation, actually.

So let's put some remedy to that tickle in our throats and begin to look at the glass half-full. Let's make do of what we have. We Filipinos are damn creative all the time. To be fair with the SBP and the PBA, they have laid out their plans—schedules, training camps and all. It's just that we fans are the ones really MORE excited about this. Because we want to see our basketball heroes not just take the stage alongside bigger and brighter stars of basketball. We want to see THE team fight for us! (Because some leaders can't during this difficult times, eh 'no?) We pin our hopes to you—Gilas Pilipinas—carry our flag and no matter what the odds are, stand up and never let us down. We may or may not win. But for you to be there—proudly fighting for flag—for us, will mean so much to every fisherman, farmer, baker, street vendor, virtual assistants, engineers, call center agents: every FILIPINO.